I am addicted to tradeshows but I always keep my eye on the news and when the news hits the fan it is hard to concentrate on other things in life.

News of the death of Osama bin Laden was a huge victory for the United States and should change the course of war in Afghanistan and Iraq.

it is a mess over there and I am glad to be an American living in Las Vegas.

Yet, it is hard to hear of news from this past weekend and not think back to that awful morning in New York. I was working for a tradeshow publication here in Las Vegas. I was still new to the industry and trying to get my head around pop-up modules and double-deck booths. 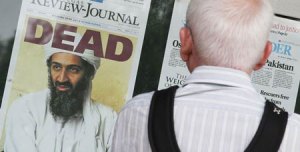 The events that transpired that early Tuesday morning will always be fresh in my memory.

Everyone remembers where he or she was when the World Trade Center towers came crashing down.

Now everyone will remember where they were when they heard the news about the Navy Seals who stormed a compound in Abbottabad and killed the most hated man in America.

It was justice served.

Perhaps this is not the place to discuss the events that took place in another American city or in a small town in a country I will never visit, but it goes to show the reach that one man had and the effect his decision had on a city this evil man probably never visited.

When the planes hit the Towers in New York all planes were grounded and McCarran Airport and the Las Vegas Convention Center were placed on high alert.

Tradeshows, conventions and tourism came to a halt that day and Las Vegas’ economy was crippled.

Comdex was expected to give its usual boost to the Las Vegas economy but after the attacks there was talk of canceling Comdex all together.

Comdex was expected to draw upwards of 200,00 attendees to its November Show. Comdex picked up some attendees in the days leading up to the show but final numbers came in at 110,000 attendees. The tech boom head reached its peak and in June 2004, Comdex cancelled the 2004 exhibition in Las Vegas.

According to news accounts, McCarran was averaging more than 3 million passengers a month until the number dropped to 2.1 million in September 2001 and remained below 3 million until March 2002.

Gaming revenue for Clark County fell from $650 million in August 2001 to $595 million in September and stayed below year-ago levels until February 2002.Hotels were discounting rates like car dealers to maintain occupancy levels, which had fallen from 90 percent to about 70 percent.

It is hard to believe that one man could create such world-wide terror but now that he is gone, it is my hope that we can work to solve other issues that directly effect us as Americans living in Las Vegas or anytown, U.S.A.

As a I watch President Barack Obama lay a wreath at Ground Zero I look ahead with hope for a peaceful future and a prosperous trade show business. I do know there is much more work to do and peace will not come easy but catching Osama is something President Obama can mark off his bucket list.

See you on the floor!