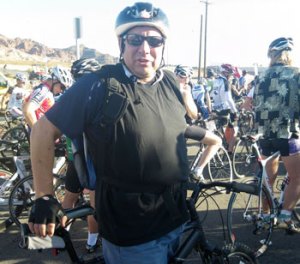 Interbike was in Las Vegas not too long ago and I participated in a 24-mile ride held at the outdoor demo area in Boulder City. I enjoy riding a mountain bike but I have not spent much time on my Trek mountain bike lately.

When I lived in the Lake Tahoe area I rode just about every weekend along one of the many trails around the lake. The air was always fresh and the views of Lake Tahoe are always breathtaking. Lake Tahoe is a long way away but I couldn’t resist a chance to participate in the Tour de Lake Mead through Lake Mead National Park.

The first problem being able to wake up early enough to catch the shuttle at the Sands Expo in Las Vegas. Not being an early-riser I knew this would be difficult but I also knew that I did not want to miss a chance to ride with other cyclists visiting Las Vegas for Interbike.

I planned to use my own bike so I packed my Trek into my Nissan the night before and I did manage to wake up at 5 a..m., don my biking shorts, a shirt and head onto the freeway before 6 a.m. I was in a hurry knowing that the shuttles leave around 6:30 a.m. from the Sands. I parked at  the Venetian, put the front tire back onto the front forks, grabbed my backpack with two digital cameras and rode to the shuttle area. I noticed that not many other bus riders had bikes and I would later realize that many people would be riding demo bikes that were available at the Outdoor Demo area. I felt fine having mine along since I have not spend much time on it lately but it would be nice to take a new model on the road. My mountain bike would have to do for the day and I looked forward to seeing what my 40-something body would feel like after 12 miles, let alone 24.

I know I was a little out of biking shape but I felt ready for this ride. I have been on Mr. Toad’s and the Flume in Lake Tahoe — two of the more popular bike trails in that area. The last long ride I went on was more than 10 years ago when I participated in the Ensenda to Rosarito ride in Baja Mexico. I was eager for a chance to ride again and it did not matter that I was probably not in the best of shape for this ride.

The shuttle made its way to Lake Mead and pulled into the Demo parking lot. I had never been to Bootleg Canyon and I was impressed with the sight of hills. Interbike had its demo area fenced off and the wind was slightly blowing. I felt ready.

Acccording to the e-mail I received the Tour de Lake Mead “gives attendees a chance to ride the latest bikes from OutDoor Demo exhibitors and network with fellow attendees, journalists, and exhibitors.”

My bike was in decent shape but a cyclist nearby noticed a few things that needed improvement. Keith Little, who owns a bike shop called Prosport in Kalamazoo, Mich., helped me adjust my seat and pointed out a problem with my gears. Luckily there were lots of help and i was able to get my bike in better riding condition. The seat adjustment alone was a big improvement on my back and other delicate areas.

The ride was described as 24 miles of rolling hills overlooking Lake Mead. The return to the demo site from the rest stop, which is sponsored by H2O Overdrive, is on a quality bike lane with a moderate climb.

It was rolling hills all right, but rolling downward for half and rolling uphill during the return back. Getting to Lake Mead was the easy part. Riding back was a challenge. My breathing became a bit labored and I had trouble gaining any momentum as I made my way up and up and up.

With less than two miles to go my legs started to give up and I began to walk along Boulder Highway wondering how long I would take to reach the demo area. Fortunately for me a local resident saw me struggle and offered a ride in his truck. I put my bike in the bed and hopped in. I felt defeated but at least I would not be found lying in a ditch along Boulder Highway.

Hot and thirsty I soon found myself back at the demo area and began drinking every free sample of energy drink I could get into my system. Energy snacks were also available and I ate what I could. My favorite energy snack were the Clif Shot Bloks and I took quite a few samples.

Inspite of the aches and sweat from the day I would do it again but as I get closer to 50 (Ugh!) I need to spend more time on my mountain bike and less on my office chair but it is hard to find a balance with each passing week.
Interbike is a great show for Las Vegas and for a while it looked like it would be movingto early August next summer in Anaheim. (Click here for more information.)

It turns out that Interbike will be returning to Las Vegas afterall. In response to feedbackthat it was moving the show to August in Anaheim for 2011, Interbike on Oct. 12 announced the 2011 edition of the show will stay in Las Vegas and will be held September 12-16.

Great news for Las Vegas and great news for Interbike attendees. I guess I have nearly a year to get ready for another Tour de Lake Mead.